Over the last few weeks, ULFA and the University administration have been discussing a proposal by ULFA to streamline negotiations, focussing on a few key issues while reverting to the status quo on less central issues where the two sides remain far apart. As part of these negotiations, the two sides are also exploring whether our current case before the Labour Board on “bridging” could be settled at the bargaining table within this expedited proposal.

Under the proposal, ULFA is preparing a package of positions it would be prepared to accept in exchange for agreeing to reach a Memorandum of Understanding on the effect of bridging during the current round of negotiations. If the two sides are able to come to an agreement on ULFA’s package before the end of the year, ULFA would suspend its case before the Board until the agreement was ratified on both sides, at which point the union would withdraw its application. If the two sides were not able to reach an agreement on ULFA’s proposals before the end of the year, or if such an agreement were not ratified, the “bridging” case would proceed to the Labour Board as currently scheduled and the broader negotiations on all outstanding topics would resume. All positions presented by ULFA during this expedited process would be contingent on agreement being reached by the end of the year as part of the expedited process and would be otherwise subject to withdrawal or revision.

The Board side agreed to pursue this expedited approach last week. As part of this agreement, the two sides also agreed that the Board would present written proposals on Article 10, 16, and 24 by November 8 and that the two sides would meet on November 15 to attempt to settle articles outside of the core package where agreement seemed close.

The Board sent its written proposals on November 7 as agreed. On November 15th, ULFA presented language on six articles, one of which was scheduled to be included in the package for expedited bargaining were agreement not reached on the 15th. The Board side presented three articles on the 15th, two of which are to be included in the proposal for expedited bargaining.

These are all articles on which the two sides have exchanged language a number of times (as always, you can follow the progress of negotiations here).

As always, the negotiations were cordial and constructive. In the case of ULFA’s proposals, we were able to reach agreement on new language for Articles 10, 24, 27, 30, and 31. This brings to 12 the number of agreed-upon articles.

We were unable to reach agreement on Article 16, which, under the agreed-upon proposal for expedited bargaining, will now be included as part of ULFA’s “package” on November 22nd.

In the case of the Board’s presentation, Articles 5 and 6 are part of the agreed-upon proposal for expedited bargaining. The Board side therefore used its presentation to clarify its understanding of the issues involved in each case and to suggest language that ULFA might consider for use in its “expedited” proposal next week.

Article 29 has been back and forth across the table several times. Unfortunately, there was still sufficient distance between the two sides to prevent agreement being reached on the 15th.

Town halls to be rescheduled

ULFA had originally planned to hold two Town halls next week to supplement the bargaining blog in bringing its members up-to-date on the current status of negotiations.

The Board’s agreement to pursue ULFA’s proposal for expedited bargaining, however, has greatly increased the amount of preparation the Bargaining team will be required to do in advance of next week’s bargaining session. We will therefore attempt to reschedule the Town halls for later in the semester. As always you can stay abreast of developments in negotiations by following this blog. 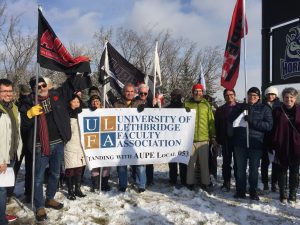 ULFA had good representation at the November 7 AUPE information picket. Approximately 30-35 members of the Faculty attended some or all of the event, which also received positive media attention. The picket gave us a chance to try out our new banner, stand with our AUPE colleagues, and learn some techniques from pros.

On Tuesday November 13, the Board published a position statement on some of the issues raised by AUPE. You can read their statement here.

The posts on this site are intended to provide general information to the membership of ULFA about labour matters. The information they contain is provided without prejudice or guarantee and is intended for a general, non-specialist audience. While every effort has been made to ensure that the information these posts contain is accurate, posts on this site do not represent an official legal or negotiating position of the Association. In the event of a disagreement between a post on this site and an official notice or document, the official document is correct.